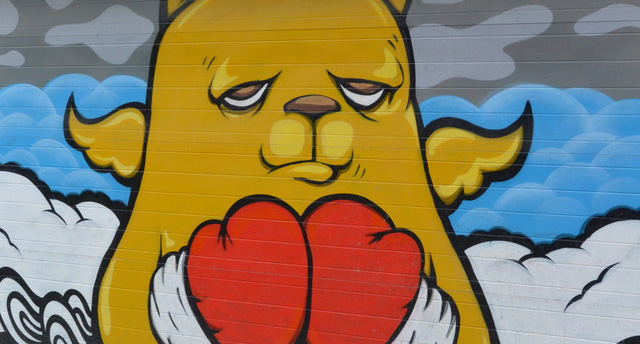 His bear symbol speaks to survival and life in the urban wild.

Chicago-based Puerto Rican muralist JC Rivera has an unmistakable trademark character: a beaten-up, boxing glove-wearing bear. Known as The Bear Champ, the gruff-looking bear speaks to the fighting spirit and survival instincts JC Rivera has identified with since he dropped out of college in Puerto Rico to work in the States.

“I wanted to be a boxer growing up,” JC Rivera remembers. “I was a boxing fan my whole life. I still am. It was, like, ‘Oh, I painted this bear that symbolizes me wanting to do something like that.’ I created the bear like that, a boxing bear, beat-up. He was smoking a cigarette at the beginning—tired about all the punches in life, but still going. It’s been through a lot, but it was still going.”

JC Rivera saw his experience reflected in the eye-catching, graffiti-inspired character. Growing up in Puerto Rico and leaving for the States in his early 20s was no easy feat. ”Hey, I’m 30-something now, almost 40, so my whole life I was trying to be an artist, trying to do something better and come up with something creative I could be,” he says. “Be something. Be proud of who I am.”

JC Rivera was born in Ponce, Puerto Rico among artists. “My grandpa was an artist. My dad was an artist. My older brother was an artist,” says Rivera. “But they actually didn’t make a living.” As a passionate and curious kid, he began drawing on his own, namely sketches of Michael Jordan.

It wasn’t until he uprooted from Ponce to make a go of things in Orlando, Florida that he finally began making money off his art. He lucked out when buying an old Mac at a nearby pawn shop, Adobe Photoshop already installed. “I started playing with it, and I started my book, drew digital logos, and I put [together] my portfolio of made-up logos,” he said. “People started reaching out to me, ‘Hey, can you do my logo?’ I was charging, like, really cheap. $20 to do a logo.” Then,  JC Rivera realized he could do what generations of his family members couldn’t do on the island: “Oh, I can do this, maybe, as a living.”

In Chicago, he found his way into the tight-knit street art community. “When I started doing it, we were a few people doing it, but now it got bigger and bigger,” he says. “Now, there’s people doing stuff for Nike, a lot of different companies.” According to Rivera, there’s a collegiality among Chicago artists that doesn’t exist in New York or Los Angeles. “There’s room for everybody, and we help each other. I try to help other people, and other people come to me and I say, ‘Hey, let’s collaborate just for fun, too.’ Everybody’s doing their own thing and we come up together to have fun.”

After a few years of creating things for others, JC Rivera wanted to create something for himself. Eventually, he resurrected an old sketch of the bear, and it’s become a part of his work ever since, even if it took some time for gallery-goers to catch up. “I did a show, twenty paintings at a gallery,” JC Rivera says. “People came around and everybody would be, like, ‘What the fuck is this?’ People would look at the bear and be like, ‘What is it?’”

“I took all the paintings and I put them in the corner of my apartment and just like, not giving up,” said JC Rivera. “It was frustrating, people not seeing my work for what it was until I started painting murals.” JC Rivera moved into mural work only seven years ago, when he started painting with a graffiti crew. Over time and with persistence, things picked up. “I started posting on social media and people were, like, ‘Oh, I like that bear. Can you paint my garage?’ I went from painting garages to doing commercial work.”

Like JC Rivera, the bear has had its own journey from small, humble sketches and unloved acrylic paintings to giant murals, even making an appearance on a pizza box. JC Rivera recounts the serendipitous moment when Parlor Pizza, a Chicago-area restaurant, reached out to him to paint a mural. “I said [that] the week before, I did the bear holding a slice of pizza, eating it,” he remembers. He sold them on the idea of doing something more with the character. Now, according to Rivera, Parlor Pizza plans to take The Bear Champ from their pizza boxes to “stickers, shirts and everything.” It leads to more local bear sightings in the wild, and spreads the word about Rivera’s work. He even envisions giving the bear its own animated series someday.

Much of Rivera’s local celebrity started with regular posting on social media, leading to over 35,000 followers on Instagram. “It was just posting and just being me,” Rivera said of his social media game. “I don’t really curate anything. I reply to most of my DMs when I get a chance, and I try to talk to everybody. I try to reply to whatever I can, post something that people can relate to.”

Fortunately for the man behind the Bear Champ, the secret ingredient was being himself. “I’m me. I’m myself.”

He has made one modification to the bear’s design over the years, however.

“Now, he doesn’t smoke a cigarette, because I have kids,” Rivera laughs. “I grew up a little bit and it’s different. I put a band-aid on his head now because that’s the healing process of, ‘Hey, went through all that fight, and now it’s the good times.’”