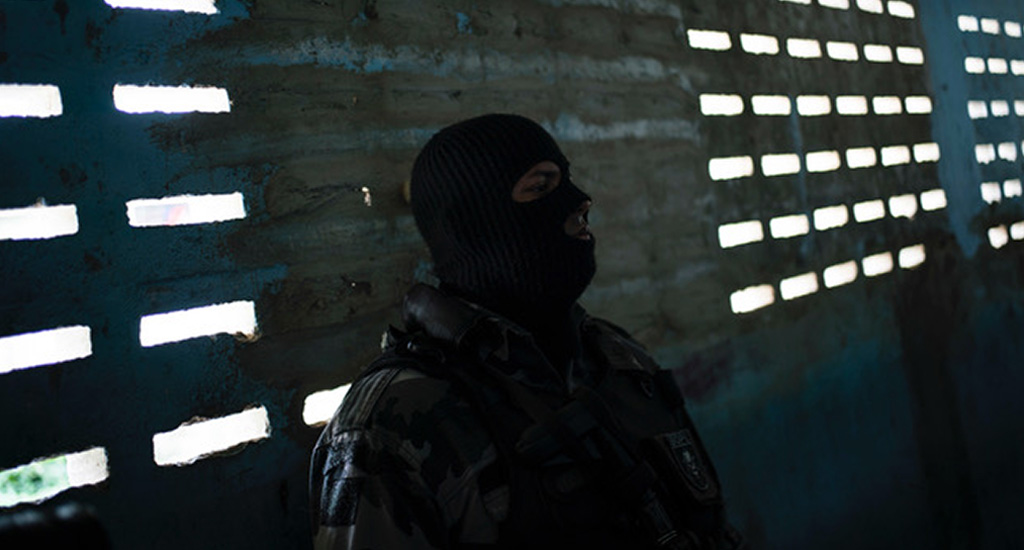 In The Third Bank of the River: Power and Survival in the Twenty-First-Century Amazon, author Chris Feliciano Arnold chronicles the battle for human rights along the Amazon River.

This excerpt follows the Ghost Riders on one of their notorious killing sprees.

The Ghost Riders were prepared for a night like tonight: a spark to light their fire. They carried black masks. Extra ammunition. Personal firearms to back up their service weapons. Cézanne packed his submachine gun, a favorite that he liked to show off on Facebook. Were their nerves running high? Did they pass around a bottle of rum? A bag of coke? Perhaps they blasted music, setting the mood, or perhaps they drove in silence to ensure their stealth. At some point they phoned Sergeant Klebert Cruz de Oliveira— simply Klebert around the barracks—twenty-three years old, just a baby in the battalion, to request some cleanup.

Twenty minutes after midnight, the Ghost Riders cruised Bairro Adrianopolis, one of the poshest neighborhoods in Manaus. Mattos hooked into a dim side street. The squad slipped on their masks, glimpsed their reflections in the side-view mirroras to make sure everything was covered but their eyes.

At the Bar do Vasco, soccer fans were chilling with cold beers and highlights on the TV. A young man sat on the sidewalk, probably waiting for his next customer. Mattos slowed the car and rolled down the windows. All at once they opened fire, got him in the stomach, hip, and hand. Mattos punched the gas, the smell of gunpowder filling the car. The kid writhed in the taillights as a friend rushed to his side. Masks off. Onward to Rua Belo Horizonte. Their first victim was already headed to the emergency room in a car right behind them.

Bairro Aleixo. Masks on. The Shadai lunch counter. A kid alone at a table, looking like he’d already had one too many. Mattos skidded to a stop. This time the guys stepped out of the car, opened up like a choir harmonizing to the baritone of Cézanne’s submachine gun. Before the smoke had cleared, they were back in the car, hearts racing, ears ringing.

Twenty minutes later, still circling Aleixo like hawks. Perhaps more drinks, more blow. A vagabond coming around the corner of Rua Belo Horizonte and 10th Street, up to no good at this hour.

Mattos touched the brakes, rolled up to the curb. The guys on the passenger side rolled down their windows, called the man over. At the sight of their masks he ran, but they’d already tagged him.

“Turn around, turn around, go go go!” they shouted at Mattos. The wheelman punched it to the end of the block, flipped a U- turn, the guy running in the uneven beams of the headlights, slipping under a lunch cart, as if he could hide from the Ghost Riders. Dorval pulled to a stop. They stepped out, found the man trembling like a child. Done.

All night Sergeant Klebert trailed behind them like a puppy in uniform, plucking shell casings from cracks in the sidewalk, from witnesses’ hands. “I’m going to need that,” he might have told them before slipping back into his cruiser. Or maybe he just reached out his glove and let the gun in his holster do the talking. None of the shell casings he gathered were ever reported.

From there the night gets blurrier, the blood of the Ghost Riders’ victims smeared with the others across the city, avengers for Sergeant Camacho, avengers for the Giant. Mattos and Cézanne stayed out late, drove to Bairro Japiim to unload on a stoner kid who would die on his way to the hospital.

Silvio had to hit the sack. At seven the next morning, he was back in uniform, driving a cruiser as a shift commander in the 16th Battalion. The 21st Battalion chat group was blowing up. There was no bringing back Sergeant Camacho, but his death would be avenged, his family would have justice, the killers and anyone else who thought they were above the police would be punished.

“I want to hear the news,” pinged one sergeant. “We shined up Aleixo,” confirmed Mattos.

The cell records and wiretaps collected by the task force were a web of codes and images that took months to unwind. Inspector Almada and his team sifted through thousands of messages, listened to countless hours of audio, smoked their way through cartons of cigarettes as they cross-checked the cell pings to the times and places where the killings took place. With each piece of the puzzle, they requested more warrants for additional wiretaps, additional puzzle pieces.

By September the picture began to crystallize. Four extermination groups had been operating independently of each other during the Bloody Weekend, each nucleus responsible for murders and attempted murders in all but the wealthiest zones of Manaus. Three of the groups seemed to be one-night outbursts, open-and-shut cases of reprisal killings. It turned out that Sergeants Charles Dos Santos Farias and Magno Azevedo Mafra were also suspected of being responsible for an unsolved triple homicide back in May, revenge for the murder of another PM.

Sergeant Messias do Carmo Leite Junior and his partner Eliel- ton Gama da Silva were responsible for one of the shootings; they hadn’t even bothered to take off their uniforms. Brazen enough to seek out their targets from the comfort of their cruisers, they avenged Camacho with righteous confidence in their impunity, a controlled explosion caught on the dash cam.

The outburst of police violence on the Bloody Weekend—and the apparent lack of accountability afterward—emboldened other soldiers. The lone wolfs were bad enough, but it was the so-called Ghost Riders that kept Almada’s team watching their backs at night. Mattos, Cézanne, Oliveira, McDonald, and their cleanup man, Klebert. Each wave of killings only seemed to whet their thirst for more. The night that Almada and his team just missed the Ghost Riders in Aleixo, the killers started mixing up their tactics. Maybe they were beginning to suspect someone was on to them. They started borrowing Klebert’s car, a GM Celta, while Klebert drove behind to pick up the pieces in his cruiser. It’s hard to say for sure why he was never the trigger man. Maybe he wanted to be part of the mission without getting too much blood on his hands. Being on duty was the perfect alibi, né? Maybe the other guys knew Klebert didn’t have it in him, that he was too weak to do the job. Maybe he figured if he did get caught, tampering with evidence was the sort of trouble you could hash out with Internal Affairs.

Except Internal Affairs had photos of Klebert on duty in his police cruiser, 25-1843, moments after the latest shooting in Aleixo. Internal Affairs had text messages and phone readouts littered with his name. The other Ghost Riders called him a pussy. He only shot at people to scare them off. Klebert was too scared to kill anyone. Yet Klebert was the string connecting the dots on the map. By September, Almada and the team had identified the core of the Ghost Riders—Núcleo 1 in their official notes, each with his own troubled background.

Sergeant Silvio José Silva de Oliveira had been involved in a previous off-duty shooting back home in Pará. Months earlier, he’d traveled to Belém with his service weapon in checked baggage, a privilege afforded only to police. One night he got tangled up in an altercation in the street. He pulled his pistol and shot the other man dead on the spot. The authorities in Belém never questioned his claim of self-defense. Now it was clear the guy had acquired a taste for killing, gaining confidence each day as he slipped in and out of his uniform without consequence. For the time being, there was nothing Almada and his team could do but watch, listen, and try to catch them in the act.

Words by By Chris Feliciano Arnold