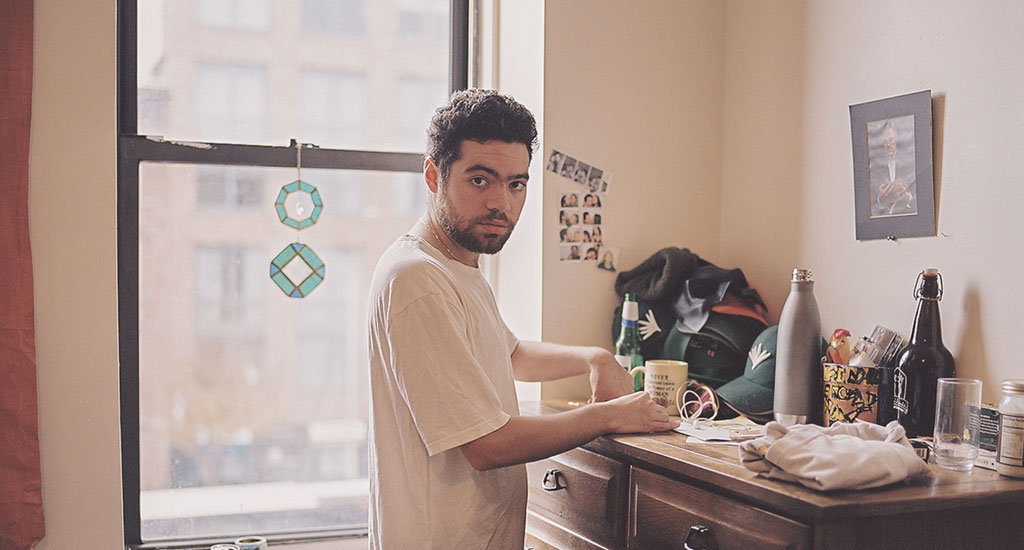 Chilling at the crib | Nathan Bajar

Although this Nuyorican emcee gives no f$%cks about his importance on the rap scene, here’s why you should.

The first time I heard Wiki speak at a media event on the Lower East Side, he’d lost three teeth after getting punched. On the floor with RATKING, Patrick Morales rhymed about being a “Piece of Shit,” and he meant it. He claimed his Nuyorican heritage with pride as he staggered—mic in one hand, brown-bag 40 in the other—grinning and bleeding through his set. Wiki was young sabotage waiting to implode, slamming the mic to his forehead and laughing about his damaged grill through anecdotes on his worthlessness. I wondered why we should care about Wiki, the kid looking like the next big waste. Next time I saw RATKING at CMJ, he was less wrecked, his girl bouncing in front of the crowd in support. He mentioned Boricua more, he bled less. The crowd was really with him; it was his New York. We were so thirsty for the real, young, classic item we just knew it had to be Wiki. Latin, hip hop, concrete. Wiki delivered. Ever since, he has sustained, traveled, regrouped, and produced fire.

Patrick Wiki Morales brings a lot of NYC wherever he goes and into whatever he spits. It’s there on his solo release, No Mountains in Manhattan, named top album of the year by Rolling Stone. He brought it with him to the UK last month and to the documentary short, The Mayor: Wiki’s Five Borough Tour. It’s in his hard-hitting delivery, brazen lyrics, and thickest of Gotham accents. The city is with him as he acknowledges tragedy in his own corner this month, standing with the victim of assault at the hands of a hip hop cohort from Secret Circle.

Wiki’s ability to channel nostalgia and shape it through his rabid delivery captures the audience. But what holds us with him on longer freestyles or verses is his heartfelt passion that gives not the flicker of a fuck. We’ve felt exactly the same way. He expresses our frustration with a post-financial crisis, gentrificated, increasingly android city. He’s got the middle finger embedded in the throw-up of his name, emblazoned across a white tour T-shirt. We thank him for the unexpected Caribbean curse in the back of a verse and for the collaboration about living at home “with his moms,” who cameos in the video. Wiki wallows in his own low-lifeness and we welcome his company in our own failure to live up to some kind of expectations.

As a Latino hip hop artist, Wiki brings Rican punch behind a broken grill, reminiscent of an Irish boxer. A Puerto Rican flag in Irish colors is his “Wiki Flag,” the logo on his merchandise and banner at live shows. In the video for “Livin’ With My Moms,” he wears his flag as a superhero cape. Glad to be home after touring, he rhymes, “Rap and run, just like the Latin runs through my veins,” on Lil’ Me. His whole demeanor is island proud, Manhattan plus Boricua/Gaelic. Wiki is a big swig of persona in a bottle of NYC sauce.

Used to stutter but I wanted butter/

Couldn’t mutter had to use my voice

Wiki came up on classic NYC hip hop, naming himself @wikset in honor of his Dipset fanhood. With a Puerto Rican father and Irish mother, his heritage speaks Gotham. He was raised on Manhattan’s Upper West Side, went to private school with Quakers, and grew his rhyme skills with RATKING. After a couple of years garnering attention as part of the group, Wiki struck out on his own in 2015.

Wiki’s been busy since he left the RATKING pack. Collaborations and touring have him repping mutt NYC hard with flow, a strong presence, and provocative lyricism. He puts his voice behind issues, humanizing news, speaking against stop-and-frisks and gentrification. On “Stickball,” from 2017’s No Mountains in Manhattan, he explains how he’s not a product for the record industry:

The labels say that they want me/

Tell me that they can sell me

I ain’t a product/

The video is black and white, he and his boys playing actual stickball in the street, a throwback to simpler times. He’s wearing a button-down short sleeve, hair in waxy waves, smoking, looking like a cross between Rita Moreno’s novio in West Side Story and the leader of the Bowery Boys.

Morales’ nasal singsong can have a Big Pun or Beastie tinge, or his voice can round out, pulling the listener into his narrative. He details sweating at the Russian-Turkish Baths, hurting after a big night or a fall-out with his shorty on “Pretty Bull.” He’s in the Secret Circle, balancing out gravel tones of colleagues with a vicious verse on “Tube Socks.”  He’s “Icarus, done trying to get to the sun.” As he says on “Stickball,” he’s “just a bard with bars.” Tired of the effery. Wiki brings fire on his record with Your Old Droog, telling the competition, “The rap gods ain’t pick you/ It’s Vishnu.”

On videos of freestyles, moving through his city or on tour, Wiki attracts derelicts and commuters giving pounds and hugs. His smile includes passersby in his antics, carrying the everyman spirit along in his step. He doesn’t need our approval or consideration but he gets it anyway. For all of us enamored of that concrete island, Wiki matters as our protagonist in the city journey, always under construction, never forgetting where he came from.