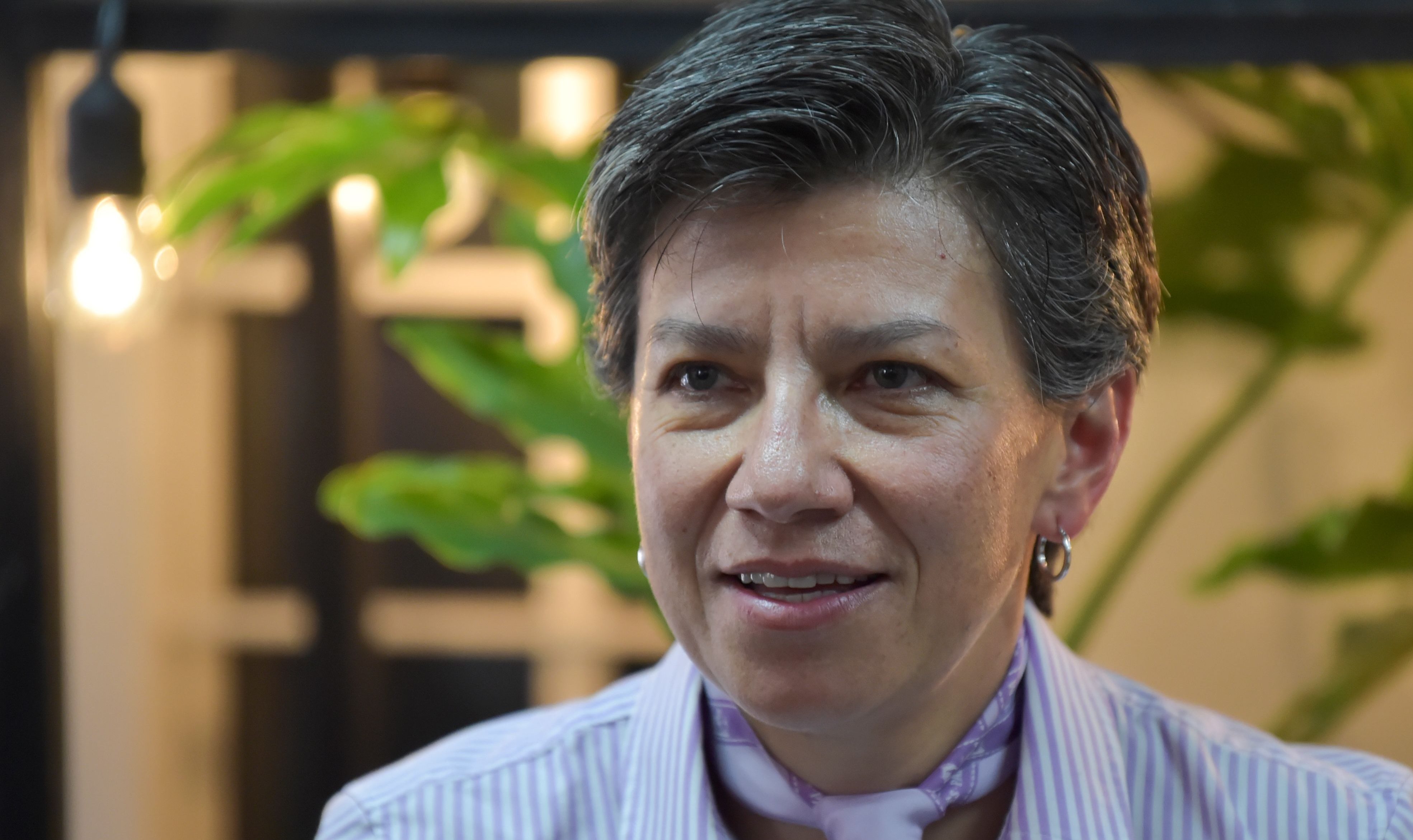 Bogotá is a portentous and unruly city, a beast of numerous maverick heads slumping in the core of Colombia, serving as the country’s heart, brains—and if the air were less polluted, its lungs, too—thumping arrhythmically to the beat of inequality. The capital is perched at 2,600mts/8,500ft above sea level, a low-pressure atmosphere with a high number of inhabitants; more than eight million people—from the country’s wealthiest to its most destitute.

Fringed by the Andes mountain range, it revels in a bipolar weather system. Daily, temperatures drop below zero in the morning and reach borderline summer heats around noon, only to be whacked by torrential rain in the afternoon, leaving room for the sporadic balmy evenings and frequent freezing nights.

This unpredictability means its streets and highways erode faster than those of any other city (not a verified fact but rather the impression of this well-traveled writer) with potholes blooming after every shower, an eternal duel between urbanism strategists, Mother Nature, and mediocre engineering, leading to the city seemingly always being under construction. Rarely a neighborhood is seen without orange cones or flashing lights announcing diversions, a tar playground for excavators and steamrollers to gambol.

Gonzalo Jimenez de Quesada, who captured the municipality—formerly-known as Bacatá—after beating the Muisca indigenous confederation that ruled it, announced the city’s more westernized monicker in 1538, shortly after initially baptizing it as New City of Granada. Along with its new name came its first mayor: himself. Back then, most likely than not, the victorious explorer never imagined the New Kingdom of Granada’s novel possession would become the chaotic location it is today; the challenge had only begun.

After Jimenez de Quesada, a slew of wealthy men with close ties to the regime, and later to the independent republic, governed as the city sprawled. Since the 16th century, Bogotá has been under the helm of a plethora of well-connected hombres. From European dauphins and New World impresarios to a murdered socialists leader, a first-generation, half-Lithuanian who got married in a circus while in the mandate, and a former lawyer currently serving an 18-year sentence in jail for running a corruption scheme from the Palacio Liévano, the mayoral office.

Until October 2019, one would’ve surmised that only eccentric chaps and oligarchic madmen were fit to govern Bogotá, but on the night of the twenty-seventh day of the tenth month, local reporters announced an improbable outcome in the local mayor elections: a woman had won. And then, they added: a woman, in a relationship with another woman, had won.

The first picture to hit the country’s platforms showed Claudia López, a former Senator and Presidential candidate for the Green Alliance party, embracing victory in the arms of one of Colombia’s Representatives, Angélica Lozano, solidifying the unimaged conquest as they sealed their lips. The achievement was manifold: a personal win for a left-winger with a humble upbringing who made her way through what seemed to be a plutocracy with shades of nepotism; a triumph for women, often oppressed by a highly patriarchal system; and an extraordinary achievement for the LGBTQ community who proudly waved their multi-hued flag announcing a city-wide shift in mentality.

Rarely a neighborhood is seen without orange cones or flashing lights announcing diversions, a tar playground for excavators and steamrollers to gambol

No victory is free of bitterness.

No victory is free of bitterness, and the losers soon raised their voice, echoing right-wing, extremist, and religious shouts, denouncing the supposed immorality of letting two people from the same sex love each other. The defeated weren’t new enemies. López had been accumulating them through the years with each public appearance, op-ed column, and investigation piece she published across Colombia’s major news outlets, criticizing the rigged system and proving the paramilitary wrongdoings of several politicians (particularly those linked to the Centro Democrático, a Conservative party led by former President Álvaro Uribe Vélez, himself signaled by her as the godfather in a plethora of illegalities).

The newly elected politician appeared unaffected by the criticism, lolling instead in the worldwide coverage that amplified said photograph, taking the opportunity to announce her wedding plans publicly, materialized a few weeks before the end of the year at a restaurant located on the 41st floor of a building downtown Bogotá, surrounded by a petite comité that included Lucky, the city’s new First Dog.

As the new decade broke through, López celebrated the first day of her mandate with a public picnic at the Simón Bolívar park, the biggest in the city, rather than in the Simón Bolívar square, where the many different governmental offices that reside in the center of Bogotá intersect. She purposedly changed the customary location for official transfers of power to signal precisely that; this wasn’t just your typical hand-down between the ruling class.

Blessed by a usually rare, yet climate-change consistent balmy day, López wore her typical attire; a sober black-pant-white-shirt outfit, topped with a colorful scarf, a clean haircut, and slick spectacles. “Her style reflects a lot of courage,” says Vanessa Rosales, a cultural critic whose work focuses on the intersection between fashion and feminism. “The valor behind the way she dresses corroborates that there are many types of women rather than the kind that’s expected in a conservative society like Colombia; her femininity is constructed from individuality.”

“Her style reflects a lot of courage,” says Vanessa Rosales

In just the first months of being in command, Lopez has been a breath of fresh air in an ever-growing city constipated by smog. She’s an image that has brought pride to a new electoral body made-up of Millennials and Gen Z’ers who’ve managed to smash the outdated structures their old-school parents were ready to pass onto them, a mostly retrograde intellectual genetic that doesn’t resonate on social media, the ultimate platform for self-expression and political contention.

Despite this support, López—just like every other public servant on the planet—has been met with plenty of criticism in only a short time, a reaction made obvious when analyzing her proposals. But let’s not blame it all on her; voters are always naïvely captivated by campaign promises, quickly forgetting that their implementation will ruffle some feathers—mostly in the way of taxes.

An open letter to the city

Recently, López wrote an open letter to the city, reminding them of how unsafe it has become, offering the contributors the opportunity to voluntarily pay an extra 10% duty to sponsor a modernized police force and new tactical equipment to ensure the welfare of Bogotanos. Whilst I appreciate her candid approach, shouldn’t the taxes we already pay be sufficient to guarantee we won’t get mugged on the streets at night?

Although homicides have been consistently decreasing the past few years, robberies have drastically gone up; security is a significant cause of concern for her government, but I imagine it’s not highlighted on her to-do list, saving her highlighter for projects that can be materialized, rather than fluctuating statistics. Case in point: Bogotá’s metro. After years of debates and failed proposals, her predecessor Enrique Peñalosa signed a deal to build the first metro system in the city, a colossal endeavor led by Chinese engineers who were awarded the $5.2bn contract.

The initial stages of construction are already underway; if López ends up being more politician than human, we’ll see her finding ways to cut red-ribbons left and right (even if the finalization of the new transit system is scheduled two years after her final day in office). Besides this tremendous facelift, López will have to make time to tackle environmental issues such as the pollution of Bogotá’s eponymous river, infrastructure solutions that lessen the nightmarish traffic, public educational developments, and healthcare programs—all while shielding herself from her detractors, swinging at them with every chance she gets between her agenda’s execution.

Bogotá is a chimera that can’t be leashed. It’s alluring in its very own terracotta-gray-and-green way, morphing as the seasons glide over its surface, all in a day. Regardless of those rare glimpses of beauty, it will always be a rowdy behemoth; monsters can’t be tamed, yet eventually they all pacify. For centuries, it took a lot of balls to wrangle it, but who knows, perhaps what it has always needed is just a bit of love and tenderness. The kind only a woman can give.