Gun in His House: An Argument Against Machismo 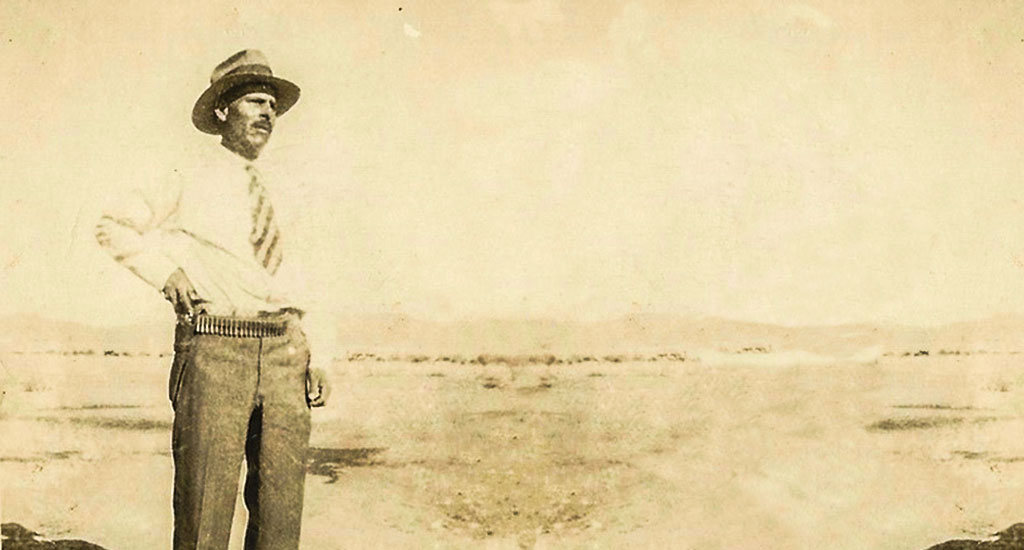 An Argument Against Machismo

I come from a long line of Mexican machos, mustachioed and hard-working, brutal and generous, hilarious and cruel.

Gun-toting, farm-laboring, factory-working, tequila and whiskey-shooting guapos, guapos, pero bien guapos. My family has the old photos to prove this. The men pose with guns. With horses. They balance on the one tractor they owned in Chihuahua circa 1935. Hats cocked to the side in noir 1940s pachuco L.A. Greasy Tres Flores hair glistens in the portraits from the days when we were called greasers.

Great-grandfather owned a pistol, a field, horses, a couple of wives, at least 8 biological children, and an adopted one, too. When he was in his 80s, my cousin and I were recklessly playing with a large dolly used to take out the trash. As he made his way carefully down the driveway with his cane, we slammed into his ankles! He fell over like a little potted tree. A sapling gone plunk. He had been a sequoia only in our minds. The hat-wearing varón in the photos, with his gun and sired sons, now lay prone next to his cane as we ran to get help.

There has always been a gun in my father’s house. He was a deputy sheriff. Besides the heavy-duty flashlight, the badge, and some boots, there were guns. Nothing overly obscene like the big black phalluses white men seem to be coveting and stockpiling these days.

He had a Glock, maybe also a Beretta. I’m not too sure. I never took stock. Instead, I sought books and Nintendo and Phantom of the Opera and stamps for my collection and the International Male underwear catalog that taught me about mesh.

The handguns were his work tools. Prosaic, mundane. We saw them when he came home from work, when he disassembled them for a cleaning every so often. The guns took up space in the house in the same way the plancha, the hand drill, the large barbecue tongs did—suddenly visible only when needed by an adult.

The guns in his house were never fetishized nor displayed. When he and I went shooting a few years back, he led me through a gun safety demonstration beforehand. He was responsible and careful.

I can understand some of the arguments for maintaining the rights interpreted from the 2nd amendment. But no right has been interpreted as absolute. Freedom of speech is regulated by safety, libel, slander, and obscenity laws. Freedom of assembly and of the press also have their caveats. Voters have to register in order to exercise their voting rights, why not gun owners? But, then again, I came from a very particular gun-owning household.

More disturbing were the police Jedi mind tricks my father would wield, like when he would interrogate us children about the daily whereabouts of my mother, taking note if she said she went to the mall but we listed the supermarket instead. Discrepancies in the details of her itinerary would lead to a fight. The wife’s odometer would be checked. Store purchases were monitored. My clotheshorse of a mom would hide her unapproved purchases in the trunk of her car. You want a recipe for making children into nervous wrecks? Enlist them as informants of their mother’s quotidian whereabouts.

Over and over, in households headed by machos, details of my friends’ Latinx childhoods fill out the picture of machismo: daughters had to wear dresses, boys had to have belts, dinner had to be served at a particular time in a particular way. A cold beer waiting by the glass. Not served, just waiting for the breadwinner, his children and wife waiting also, like the bottle of beer, for the man to take his seat. When riding in the car, wives’ legs had to be covered. When he whistled, the children knew their attention was necessary.

The deal was this: Children and women receive shelter, clothes, education, and food only if they obey. Behave, conform, obey.

Before I knew the words “law enforcement submission holds,” I witnessed them applied to my mom during a particularly intense domestic dispute. Maybe she shouldn’t have become hysterical and thrown what she threw. Who knows what the fight was about? But she was tactically subdued as all her children watched and cried out in loud baby animal noises. He could take any of us down without question. That was always clear.

My grandmother was at a party. 1950s. El Paso. My grandfather was dancing with another women. He would come up close to my sitting grandmother to boast: Así se baila. This is the way you dance. An Anglo (she’s from Texas and that’s the way my grandmother referred to him) asked her to dance. Why not? she thought. My husband gets to dance with whomever he chooses.

When he noticed, my grandfather approached and whispered in her ear, “You’re going to get it, bitch, when we get home.” (I’ve never heard my grandmother say bitch. My heart was racing as she recounted). She rushed home before him. He beat her when he arrived. Their compadres next door came to the rescue. The police were called. They drove her and her children to her parents.

Maybe machismo is a shield, a spear, a sword, an atlatl used as a protective reaction against white supremacy? Against capitalism? Against xenophobia? Against women’s power to give (and by default) take life? I’m not a philosopher, so I don’t know the answer. We can only confront the men and ask them why when they are old, and less likely to hurt us. But by then, when confronted, they either don’t remember or they get all aguitado and ask, “Oh, so I’m such a bad guy?”

Admittedly, I have been seduced by the drag of machismo and it’s gaudy accessories—the cocked hats, the belt buckles, the Stetsons, the jeans, the facial hair, the trucks, the spread legs, the mesh, and, maybe even a little bit, the guns.

But the deal of machismo—obey for food and shelter, behave for love and acceptance—is a raw deal. No matter how handsome and full of dimples his face may be, regardless of the breadwinning, the deal is unacceptable. At least for me.

I think sitting on a couch having Fox News beamed into your brain and religiously checking in on The Blaze or Breitbart News is a form of brainwashing. Passively consuming right-wing conspiracies and hate via powerful screens for years deforms the way you think.

My father thinks my UCLA undergrad education, which I experienced 20 years ago, is no different than his brainwashing. His telegenic red, white, and blue cartoons for the elderly are somehow the same as college. I walk into this false equivalency every time I visit his house. My education vs. his shows and websites. My arguments dismissed as I listen to the ventriloquism of Fox News regurgitated in his voice. But what about Hillary and her emails!?!

In our final blowout last February, which started after he blamed Obama for the release of criminal undocumented immigrants, I threw my nephew’s high chair at the TV. I was hysterical, in a most un-macho state of feminine crying and screaming. My mom cried in recognition, “Mijo gets like me.”

The neighbors called the police. They came to the backyard where I sat hyperventilating with my brother, their hands cautiously on their guns. My father told them it was a domestic dispute that got too loud. The police made a request to see my mom, to check on her safety. She showed herself to the police.

Everything calm, the police went on their way. To lighten the mood, the male cop added, “Ok. Well, I agree with dad.” Knowing he knew nothing of what was going on, he smiled, thinking he was being cute.

They left. And the truth hung in the air, unattached and lost, like it always does after a really bad fight.

Papi went back into his house. Today he has a sloping bad back, a balding head, a heart diseased with heart disease, a body wracked from working way too hard for the roof over his family’s head, food on the table, clothes on our backs, and expensive Catholic school educations.

He had nothing more to say to me. I said, “I’m exhausted”. The guns, the plancha, the barbeque tongs stayed tucked away in his house because they were not needed. I left him to his house. His wife. His TV.